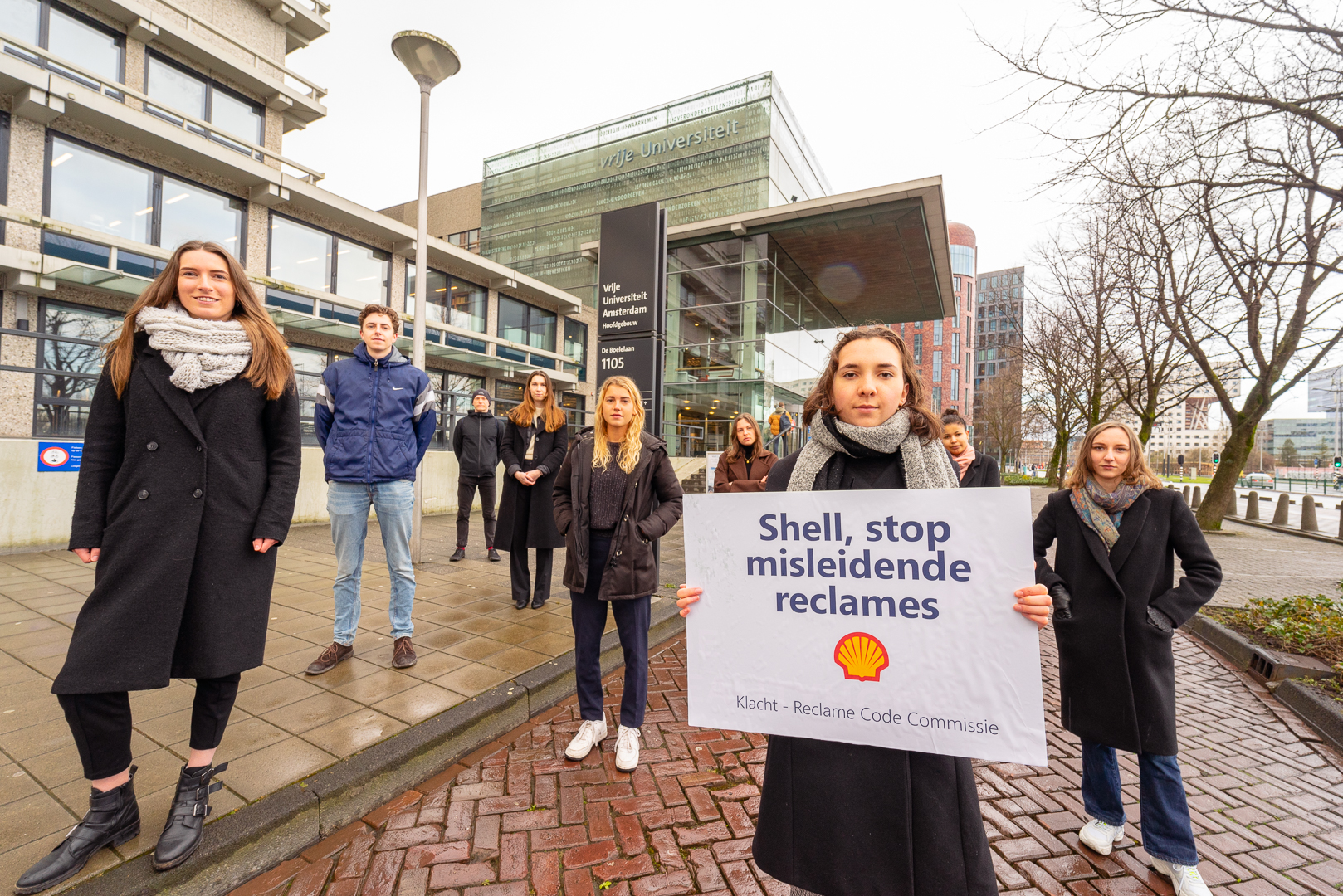 AMSTERDAM – Law students at the VU University Amsterdam have filed a complaint against Shell with the Dutch Advertising Code Committee today. According to the nine students, Shell’s advertisements are misleading. The oil company promises its customers carbon neutral driving by compensating their emissions. “Shell is promoting a product that can never live up to this claim, and that is misleading”, explains student Xander de Vries.

(This is a press release by Greenpeace)

The (international) students at the VU Climate and Sustainability Law Clinic have filed a 95 page complaint against major polluter Shell. They are supported by Reclame Fossielvrij (Fossil free Advertising) and Greenpeace Netherlands.

In its advertising campaign, the oil company claims that, at an additional charge of only 1 eurocent per liter of fuel, it will compensate carbon emissions for every kilometer the customer drives. Shell tells consumers that the carbon emissions that result from their fuel consumption will be compensated from the moment it is taken out of the ground to the moment it is pumped into their vehicle. In this way, Shell tells them, they are supporting international carbon compensation projects. According to the students this is not true, and Shell is breaking the Dutch Advertising Code and the Code for Environmental Advertising.

Misleading
“The carbon compensation that Shell is offering is inadequate in many ways, and on top of that it offers no guarantees. For example, one form of carbon compensation that the company offers, is a pledge to protect forests in Peru from logging. Our research shows that this forest was not actually being logged in the years before Shell started protecting it. Also, forests are absorbing increasingly less carbon, and the forest could burn down. Shell wants to compensate climate damage that is 100% definite with a measure that they cannot know for sure will work, or for how long it will work”, says student Lisa van Langen.

“What Shell is doing here is pure greenwashing – and this has to stop. We fully support the students in their complaint against this kind of misleading fossil fuel advertising. Carbon compensation is not a solution to the climate crisis. In fact, it can thwart real climate action. Instead of changing their heavily polluting product or service, Shell is greenwashing its dirty reputation and placing all responsibility with the consumer. This is unacceptable.”

“By making its customers believe that they can buy off their carbon emissions for just 1 cent, Shell is deceiving people. This is clearly demonstrated in the students’ expert research. After years of misleading advertising in the tobacco industry, it was finally decided to ban all
advertising, marketing, sponsoring and teaching material from this industry. We are calling for a similar ban for the fossil fuel industry.”

In their complaint the students also point out that, according to Shell itself, tree planting projects are not included in the carbon compensating product. On its campaign website, however, Shell explicitly promotes its cooperation with Staatsbosbeheer (State forest management) and planting trees, even though the additional eurocent per liter of fuel does not contribute in any way to planting trees or to supporting Staatsbosbeheer.

Worth reading: Why all fossil fuel advertising is misleading and a total ban is the optimal regulatory solution in the Journal for Consumer and Market Law (Clemens Kaupa, 2021).