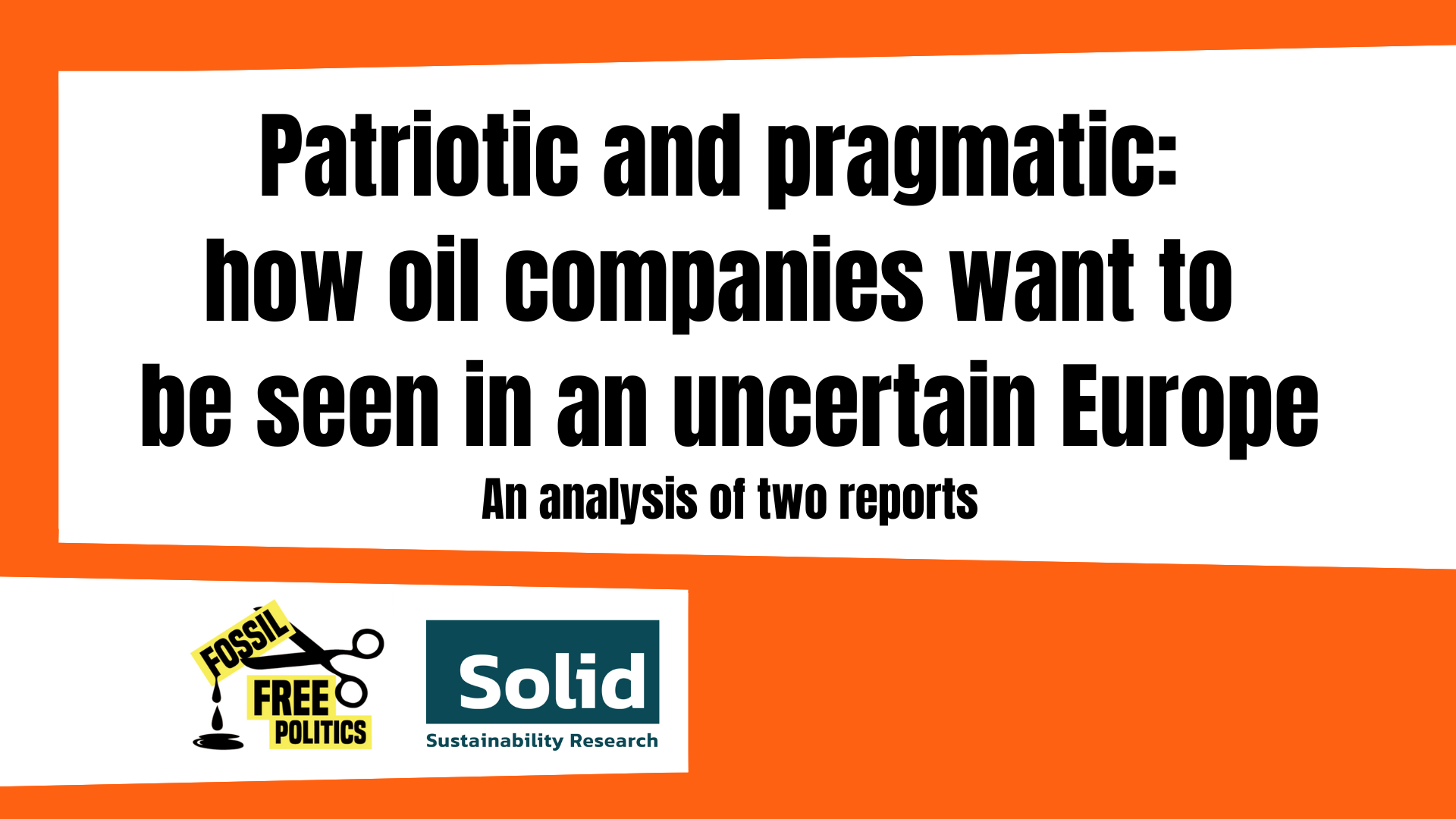 A recent study by Solid Sustainability Research and master students from Utrecht University found that, following the Russian invasion of Ukraine in 2022, European oil and gas companies exploit narratives around “energy security” and “energy independence” on social media to justify their value to the public. An investigation by Fossil Free Politics into lobbying activities of the fossil fuel industry found that similar narratives were fed to policymakers to encourage investment in fossil fuels and discourage measures to protect end users, such as price caps. Thanks to this lobbying, oil and gas companies made record profits in 2022.

While oil and gas giants’ social media departments were trying to convince an increasingly restless public of their worth, lobbies such as the European Round Table for Industry (ERT), representing CEOs from Shell, BP, TotalEnergies and Eni, amongst other companies, had the ears of EU leaders. Companies represented by the ERT have made record profits while many Europeans struggle to pay their bills. On top of that, new oil and gas infrastructure plans have been rushed through, locking in fossil fuels for the next decade. How did we get here?

“The market will solve everything”

The invasion of Ukraine in February 2022 impacted the supply of Russian gas, sending prices skyrocketing and posing a serious problem to countries highly dependent on this gas. European Commission President Von der Leyen admitted in June that “This market system does not work anymore. We have to reform it.” This ambition to intervene in the energy market, supported by various national governments and civic groups, was fiercely countered by fossil fuel lobbies. In regular meetings, the ERT and fossil fuel CEOs warned the European Commission that “fiddling with market mechanisms” could have “unintended consequences”. The Conseil de coopération économique (CCE), another lobby group, even claimed that “Market interventions… proposed by various national governments in the EU are a major concern and put at risk much needed regulatory stability for long-term investments in the green energy transition. These measures … hinder a cost-effective transition to a carbon neutral economy”.

“We are patriotic and pragmatic”

Fossil Free Politics found that European oil majors deflected these calls with the usual tactics. Wasn’t it a good thing to see European champions enjoying financial success? Their global “competitiveness” would be harmed if their profits were reduced. This patriotic framing – fossil companies representing themselves as European successes – is what Shell, BP and TotalEnergies were also increasingly telling the public over social media, compared to before the war in Ukraine.

The patriotic frame also notably includes claims over “energy security”. Industry group FuelsEurope, representing the refining industry, also used this “patriotic” framing in their lobbying. They state that their members had contributed to “additional energy security to Europe in recent months”, ignoring the fact that more and more European households couldn’t pay their energy bills anymore.

Another narrative which saw a rise in popularity during this period was that oil and gas were “pragmatic” and good for “reliable energy” and a “pragmatic energy mix”. For example, in July TotalEnergies claimed that: “Renewable energies are currently unable to meet the world’s energy needs”. Their solution? Natural gas, repeating the dubious claim that natural gas has fewer emissions than coal. Oil and gas companies naturally extended this narrative to their lobbying, urging the EU to find more sources of oil and gas as the “current recession risk is not driven by demand shortfall but supply restrictions (gas, supply chains)”.

Oil and gas companies also seem to have conveniently forgotten that their own lobbying to delay transition to renewables had kept Europe dependent on fossil fuels, and vulnerable to disruptions in their import. In fact, energy from renewables saved the EU an estimated €99 billion in gas imports avoided since the invasion of Ukraine, begging the question of whether there would have been such a cost of living crisis if more of Europe’s energy supply was independent of fossil-fuel import.

Bizarrely, Fossil Fuel Politics even note industry lobbyists claiming that the “excesses” of the energy transition had caused the energy crisis, by hindering investment in fossil fuel infrastructure. Most, however, stuck to the milder line that both renewables and fossil fuels were needed in the future – but that the latter needed new infrastructure at this particular time. Either way, the argumentation worked: in the over 300 new projects in the 10-year plan of industry advisory group ENTSOG, working on behalf of the EU, around half are for fossil gas infrastructure. Some are presented as a response to current geopolitics, despite taking years to build and locking in dangerous fossil fuel dependency for even more years to come.

While putting out more patriotic and pragmatic messaging, European fossil fuel companies did not ease up on the promotion of their alleged green activities over social media: the intensity of this type of messaging had not changed from the previous year. This was mirrored in their lobbying against taxation: they said they needed the windfall profits to invest in the decarbonisation of the European economy. This narrative is far from the truth. For example, Shell spent a mere one per cent of its long-term investments on sources of “low carbon” energy between 2010 and 2018. European oil majors have additionally redistributed a large chunk of their profits directly or indirectly to their shareholders, instead of investing it in decarbonisation.

“Social responsibility, but only if it suits us”

Four of the five companies studied by Solid Sustainability Research posted less on social media after the invasion compared to the same period before the invasion, and most also posted significantly less about their benefits to the local community or the economy – sponsoring community events or diversity programmes, for example. Instead, Fossil Free Politics found that they were reminding governments of their role in protecting citizens.

Behind closed doors at the European Commission, the ERT advised that “Capping prices is suboptimal compared to targeted support for vulnerable groups (tax reductions, social tariffs, subsidies)”. In other words: governments should compensate citizens for the effects of their high prices, but should not touch their high profits.

When governments followed this advice, oil companies responded with striking publicity stunts. When the French government decided to fund discounts on petrol as well as subsidies for poor households, Total announced a further discount on their petrol. This was explicitly presented as a substitute to taxing their windfall profits and successfully lured car drivers to their petrol stations at the expense of their competitors. Total’s CEO Patrick Pouyanné claimed to the French parliament that “French consumers have received a share of our super-profits by … buying our discounted petrol” – reaping the reward of public good will while reducing their taxable profit – and thus avoiding corporate tax. The French government would later use this to justify that this approach worked, according to the Fossil Free Politics report – since companies were voluntarily sharing their windfall, no further tax was needed.

“We are the solution”

Oil and gas companies were desperate to prove their worth publicly as well as behind closed doors in lobby meetings, both reports show. Several companies were vocal in condemning the invasion, while stressing privately to the EU that they were the solution: ExxonMobil wrote to European Commission’s Frans Timmermans offering to support the EU with its LNG, which was “already flowing into Europe” as they were looking at “opportunities to bring on incremental LNG supply” and “expanding the European LNG terminal capacity.” Oil and gas companies’ public communication reinforced this message: we are indispensable, we are doing our best for Europe, and we are doing it in a practical way.

And there we have it. Using the chaos unfolding after Russia’s invasion of Ukraine, fossil fuel companies made Europe even more dependent on them and their fossil fuels. And it has been successful: new LNG terminals will be built in Germany, their windfall profits are left untaxed and Europe is locked in to fossil fuels for years to come.

We need a ban on fossil influence, as we have for tobacco

To have a chance of limiting global heating to 1.5°C, we must halt all investment in new fossil fuel projects. Fossil Free Politics calls for cutting fossil fuel interests out of politics, similar to existing restrictions on the tobacco industry. The two reports discussed in this article show that the lobby narratives used by the industry to grow their power are the same narratives they use in their public communication. That is why Reclame Fossielvrij (Fossil Free Advertising) and others call for a ban on fossil advertising, similar to the restrictions in place for tobacco. This would highly restrict the industry’s propaganda power, which currently misleads both citizens and policymakers.

The World Health Organisation and governments worldwide recognised the deceit and manipulation of the tobacco industry and the undesirable health consequences of their lobbying and advertising, so it was rightfully banned. It is time for a similar ban on fossil lobbying and advertising. There is no time for further delaying the transition to a clean energy system.